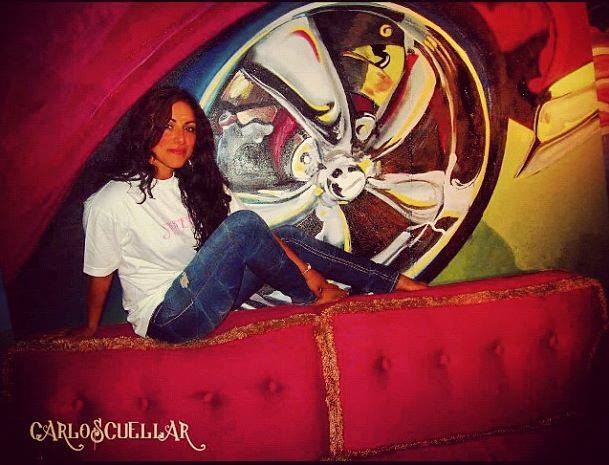 “Traidora, Traitor….” These were the words I heard from my tias when La Malinche would come up in conversation. I never understood why the mere mention of La Malinche provoked such anxiety. Anzaldúa tells us that La Malinche became La Chingada -the fucked one. Her name evokes mixed emotions to Chicanas, Mexicanas, and Pochas. She was Hernan Cortes’s interpreter and sexual object; su primer conquista. She is blamed for the destruction of the great Aztec People. In her complexity, she represents both innocence and guilt. La Chingada is our greatest Mexican contradiction, our most deep-(seed)ed confusion. For some, she deserved all that she endured under Cortes’s dominion because she was the whore that sold her people out, La Traidora. She provoked su conquista, She got what she deserved.

For others, she belongs on a pedestal of honor. They challenge the conventional beliefs around La Malinche and re-imagine her as a young innocent Indian wombyn who was sold into slavery and birthed our distinct Raza, La Madre del Mestizaje. Children of Mexico will either uplift her as a Mother or degrade her as La Chingada. This is the binary that Anzaldua both traces out and also teaches us to transcend. Her writing is incredibly relevant to me and to the children of Mexico because it is a chronicle, a retelling, and a transforming of our story and our identity. I am quite literally La Hija de la Chingada (daughter of the fucked one) historically, and presently this is my identity.

My mother stands 5 feet tall, canela skinned, with wavy opaque hair. Abuelita always called her prietita. She embodies the features of an India. Machismo and white supremacy team up in the Mexican experience against wombyn that bare indigenous features forcing them to become subservient and if one rebels, there is a price to pay. At an early age Ama worked in a bar as a dancer. In the thirsty eyes of the depraved men around her, she was sorted neatly into the whore category, deserving of any and all desecrations of her dignity. Without her knowing she was falling into the whore side of the long established virgin/whore dichotomy that has been constructed for Mexican wombyn.

“Ten, nine, eight, seven, six, five, four, three, two, one, Happy New Year!” My mom gave me a rambunctious hug and a big Brandy smooch and so began the year 1997. I was smiling in the smile-now-cry-later Pachuca Xingona tradition that raised me. For as long as I can recall, this is how my New Year’s Eve celebrations felt. Deep down there has always been a void in my person that my mom could not fill. It was the absence of a caring, protective ever-present Apa. This emptiness has hollowed my identity.

The year was 1997. I was 14 years old. It was the year I became determined to find my father, to give the Gonzalez along side my name meaning and to become whole. In truth, this is a journey all the children of colonial violence are on, one way or another. When I questioned my mother about my father, she would respond, “El no quiere nada que ver contingo”. At some point my mom finally reached out to Alvaro Gonzalez and demanded child support. He responded with a request for a DNA test. I was offended but I extended my arm with blind courage and pride. Some weeks later he showed up at my mother’s doorstep asking to take me out for lunch. I remember my mom being hesitant but she let me go with him and tio Victor. I had barely started to sip on my Jarrito as his apology began. “Perdoname Mija pero te tengo que decir que, Yo no soy tu Padre.” I was quiet. Everything was muted. I stared at him, “Pues quien es mi padre si yo tengo tu apellido?” It wasn’t long before the moment of truth. My mother nervously said, “Cindy… l was abducted and held hostage en un hotel in Mexico City for a long weekend. I was raped by a man. He is your father.” Tears raced down my cheeks as anger began to enter my heart. I felt betrayed, incomplete; it became painfully true to me that I was, una “Hija de la Chingada”- literally and metaphorically.

My mother is my people’s mother; she is La Malinche y La Chingada. Her truth resembled La Chingada’s experience with machismo and white supremacy. She was raped, belittled, and kept in captivity for the pleasures of a man who looked at her and said to himself India puta. As a result, she started to despise the indian in her. Ama hated herself entirely from the shame that was attached to her rape. She was bottling up a shame and hate in her heart that would spear head a shift in her sexuality. She transformed from an undocumented- indigenous looking wombyn that fell neatly into the virgin/whore dichotomy into a femme-lesbian who hated men for the next twenty years of her life and transcended the binary.

Anzaldúa, enlightens us of the classifications that wombyn who are descendants from Mexico fall into according to our culture. “For a woman of my culture there used to be only three directions she could turn: Church as a nun, to the streets as a prostitute, and or to the home as a mother”. While those are three options they amount to two directions, nuns and moms on the good side and whores on the bad side. My mother transcended into a third identity, one which challenges the limits for an undocumented Mexican wombyn’s sexuality by taking the power to define her sexuality outside of the norms. La Chingada, La Malinche is a metaphor for reclaiming our indian side as a practice of autonomy in a world of cultural domination. Many wombyn of color have similar stories, we continue to be affected by the cultural aspect of our identity, sexuality, and wombynhood. La Malinche is our ancestral mother therefore, firmly and resolutely I chose to embody La Hija de la Chingada as a practice of liberation from the shackles of machismo and white supremacy for myself and the forthcoming mothers and Hijas de la Chingada. For our Mother’s legacy is immortal!