Xicanas con Ganas is the statement to live by! and on this special day for all of out there as Latinos, Chicanos, Mexican Americans all throughout the nation, Dia de Los Muertos is celebrated at large from North America to South America on November 2, every year and this year was so very special for me and Frida as we ventured to yet another amazing journey of spiritual growth, and artistic development and meeting genuinely amazing and educated women in the process of creating an altar for our loved ones in one of the most prestigious places to do it at! Hollywood Forever Dia de Los Muertos. I know I usually only speak on arts but this is not only as important for Arts sake but it is also informative for many of you who are not familiar with the tradition and culture behind Dia de Los Muertos so enjoy the picture gallery I have put together for you!

Its origins can be traced back over 3,000 years ago while Indigenous people would honor death thru rituals and ceremonies but according to the landing of Spaniards; they thought our Indigenous ancestry were actually mocking death when it reality was in the contrary, for Aztecs and other parts of Mesoamerica, death was viewed as life still continuing and they believed that their loved ones would come back to visit during this ritual. Although, Dia De los Muertos has since merged with some of the Catholic beliefs; but it still holds some of the principal Aztec rituals and that can be found on our present day with the usage of Skulls and vibrant colors, flor de Muerto and danza ceremonies.

It is so inspiring to see how every region of Mexico has embraced to this sacred day of the death in their own artistic way, thru music such as corridos, Calaveras, pan de muerto, sugar skulls, food offering and just the elaborated alters that they make in honor of their loved ones and friends. Now imagine this tradition and culture is nationwide accepted in the United States, so many people are partaking in this culture, it has revolutionized the arts, costumes and it has evolved into a sub culture itself with people from other origins besides Mexico and it is great to see it happening that way. Dia De Los Muertos has given opportunity for everybody to come together as a family, as a community as artists and art lovers to express in their own original way their respects to their loved ones that have passed on. Hollywood Forever is one of the biggest Dia De Los Muertos event that takes place in the entire nation!. It is the only cemetery that allows a celebration like this, which may of us from Mexican decent appreciate it because in Mexico this is traditionally how its celebrated, in the cemetery and placing food, favorite items and music to the dead.

Therefore partaking in this event was very appreciated, I always attend this event, and either a fellow artist is exhibiting, performing or vending on that day but I think it gives it a more personal experience by actually being a part of it this year, it was amazing!. The preparation of this event was a bit overwhelming due to the fact that I got sick during the middle of the process. But I was able to help the beautiful Lea and Candice along with Lil Frida as we both learned how to make paper mache, and beautiful paper roses for the first time. I am very thankful that they open their doors to us and allowed us to be a part of something so sacred to us as Xicanas. Thank you ladies. We were at Hollywood Forever cemetery for almost two complete days and I must say that it was an experience to actually stay in a cemetery way past visiting hours but not as brave as other participants who actually camped out and spent the night in the cemetery, drinking and listening to music, much respects for them. It was so inspiring to see everybody bringing their own essence, culture and tradition to their Alters and as we Xicanas Con Ganas began to also build our own community space for our loved ones, we all bonded spiritually that night, for all of us, this was our first time doing something like thing, well at least at this large-scale; the results were comforting for us all. I recently lost a good friend to Cancer, my dear friend Linda may she rest in peace now and I must say that although it was painful to hold my tears back, I couldn’t have done it without the friendship and sincere care from these lovely ladies. My sisters Terry and Janneth also were part of this night; as they commemorated their dear friend Andy who was violently taken away from us last year. His mother and beautiful daughter also came to pay their respects and I was very humble to have shared that moment with them; I love you guys!

As the event progressed, Frida and I walked many times around the cemetery; I was very thankful to have shared this experience with her and teach her a little bit more about who she is and what her ancestry is. But the highlight of our night was to see one of my favorite singers perform Saul Hernandez from Caifanes! Frida and I squeezed our way to the front rows and both mesmerized watched him perform. It was magical and it brought so many memories of my Tia China who is resting now.  The night ended for us at midnight, as my little Frida was completely tired from working on this event for days, I am so proud of her.

I would like to thank once again the lovely Xicanas con Ganas mujeres for allowing us to be a part of this special day, Lea, Candice, Cindy and everybody else, thank you and many blessings to your and your loved ones, new friendships were found and my respects and admiration for you ladies is stronger than ever. This experience is a great way to prove to you all that a community can benefit from each other when a sincere, artistic and educated group of women come together like we did.

Xicanas con Ganas; live by that and see how far you can go!

With much love and respects, 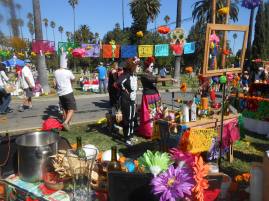 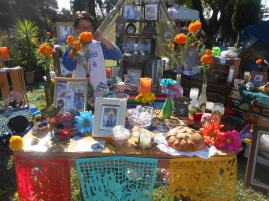 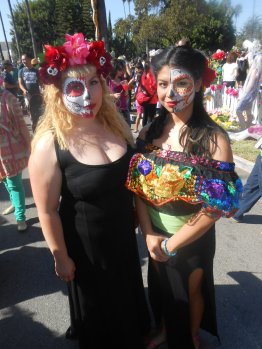 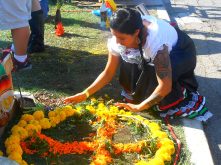 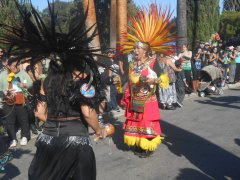 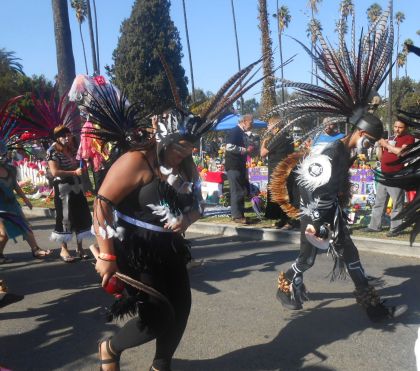 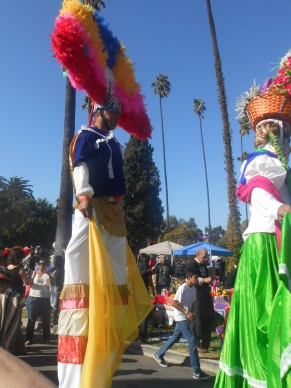 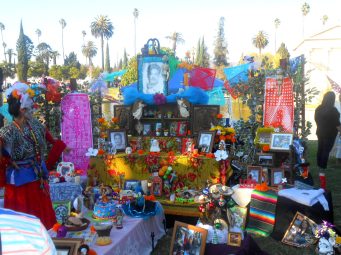 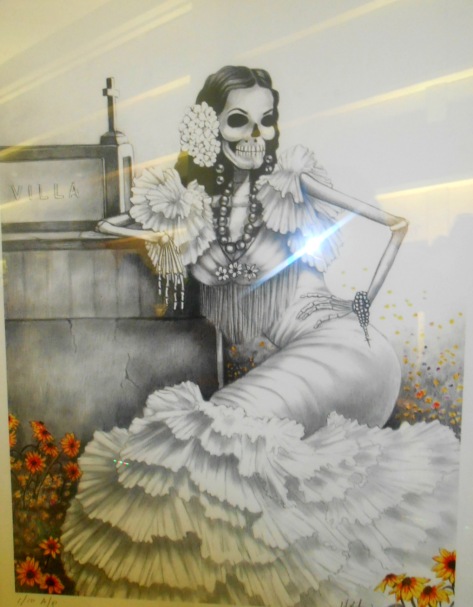 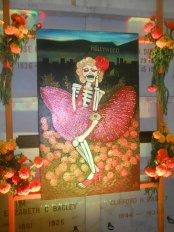 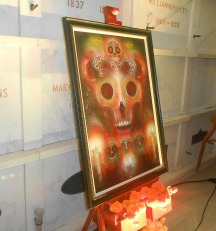 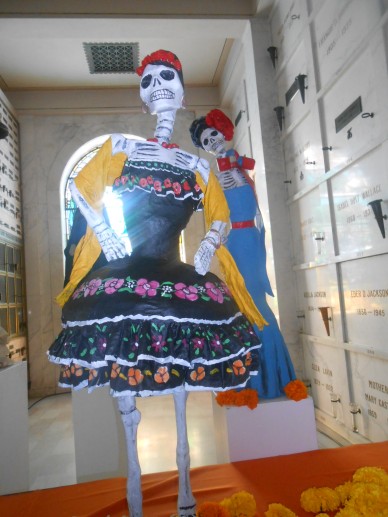 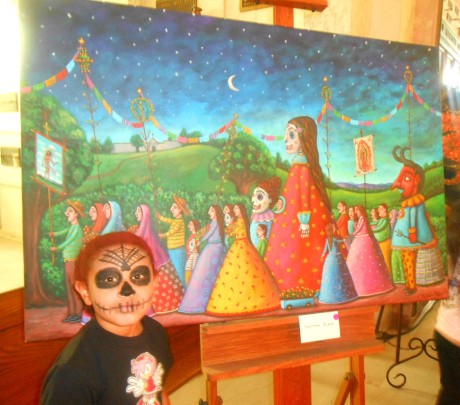 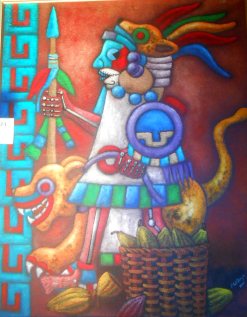 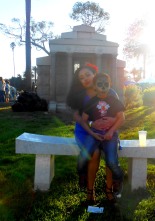 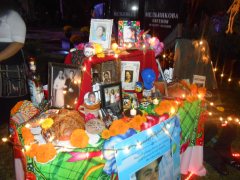 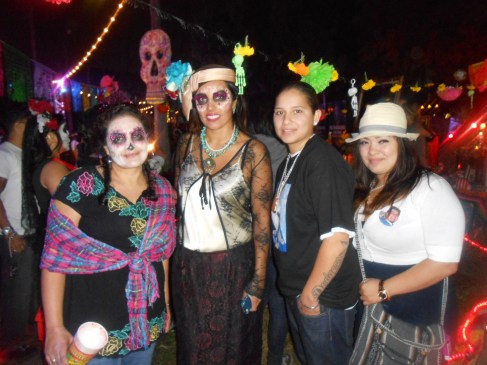 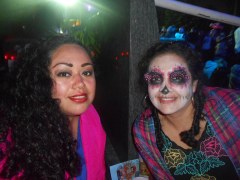 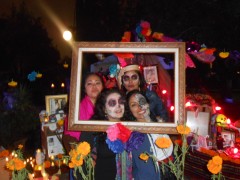